From just about all outlets, both in the mainstream and alternative media, the commissioner of the +NBA, +Adam Silver, announced that the league was banning the owner of the +Los Angeles Clippers, +Donald Sterling, for life and ordered him to disassociate himself from any franchise elements. This is a move I heavily applaud, as racism has no place in the +NBA, nor should it be tolerated when it comes up. And it’s not just in the +NBA where it shouldn’t be tolerated, racism should never receive any toleration in any sphere of American daily life. It’s a burden from our past that we need to embrace and by taking on this burden, we should try to open our eyes to the experiences of people on the receiving end of it. The sooner we have this discussion, the better. We need to do so to learn from our past so that we don’t repeat it again.

Like Loading...
In all ways to slam the Republicans for racist commentary, or the Right-Wing in general, that won’t happen in this post. I have a slightly different person to go after, Donald Sterling, the owner of the Los Angeles Clippers, over comments he made to his girlfriend about posting pictures with African American or Latin American men. What’s the critical and racist commentary for? For instilling racialist demagoguing? This is not the 1960s! Why anyone thinks it’s alright to degrade people because of their race or ethnicity is beyond my level of understanding.

While I hope the +Golden State Warriors do well in the playoffs and make it to the finals, I also feel for the +Los Angeles Clippers, as well. Like just about every other team in the +National Basketball Association, the heaviest proportion of the Clippers’ players are African American, and so the comments by Sterling make their play-off time that much more difficult as it provides them with an unneeded distraction.Besides being a distraction, it’s really goes beyond offensive. They’re insensitive and this is the worst representation of the NBA. I hope the NBA Commissioner Adam Silver and the commission board of the NBA will get to the bottom of what happened as soon as possible. There needs to be a message sent throughout the league that this type of language is not permissible. 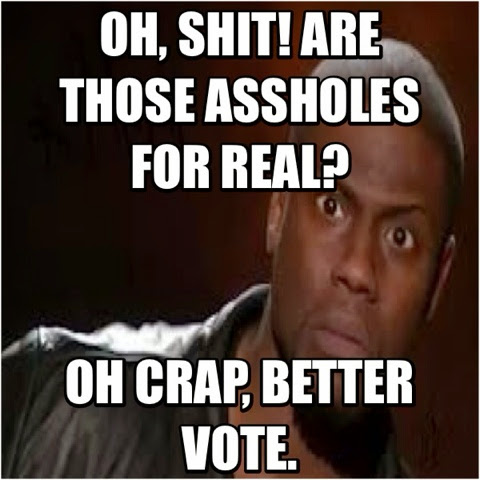 This picture says it all, and the reason behind the words is clearer than ever in my eyes. The Koch Brothers, along with other ultra-wealthy ultra-conservatives, attempting to tell us to keep out of our own nation, unless we re-instill White Supremacy with racial segregation and go after the Black community for even forcing the whole Civil (aka: Special) Rights issue, which is completely bogus. It’s not going to happen, as most Americans of all racial origins do not want the return of Jim Crow. It doesn’t serve our needs.

Like Loading...
Somehow, whenever anything happens that seems to have to do with penalizing someone who’s White for breaking the law, the racialist-right goes absolutely nuts. Take for example the Cliven Bundy case: on the nose, it’s an open and shut case of where the typical rancher has to pay a fine for not paying fees to graze cattle on federal land. Another factor to bear in mind is that approximately 80% of all land in Nevada is federally owned (nearly 20% more than the next state in line Utah), and when ranchers graze cattle in the area, they have to pay an annual fee to get a permit in order to let their cattle graze there, and Bundy had not been paying the fees annually nor the fines from the racked up fees, and so he was forcibly evicted from the area.

However, what has me concerned is that there’s been some figures who’ve backed Bundy, have also declared their intention to bring women and children as human shields. This reminds me exactly of the type of extremism that we purportedly tried to fight off in the Middle East, with only some temporary success. Still, it makes me sick to hear of Americans, specifically those from the right-wing, championing this. This is not principled conservatism, this is just outright insanity. To think that this is mainstream is even more sickening to me.

It should be time for the American public to rise up and call out the right for continually calling for violence. It’s not the American way, and to say that Democracy is Socialism, and that “Americanism” is dictatorship, bullshit! This is way we need to shut down the funding to +The Tea Party, and end their reign of violent “credibility”.

This is +jgsf1987, Share this among your friends and families.

Like Loading...
Hey all, +jgsf1987, here. I’m going to put politics aside for a moment to talk on my newest adventure as of yet, software testing. It’s pretty simple, but a little tedious at times, as you need to watch what you’re doing as precisely as possible. Basically, all I’m doing is looking for bugs, and making a note of such bugs. Like I said, simple yet tedious.

Anyhow this is my newest gig thus far.

Like Loading...
I’ve been following some stories as of late, but others not as much as I’d like. First off, the scene in Washington: No, I’m not surprised that the +GOP has a slight lead over +The Democrats in the polls, nor am I 100% concerned either, it’s a midterm election year. Midterms generally favor the opposition, that’s been the historic trend as it is. What does concern me though is that +The Democrats are too busy gloating about how dumb the +GOP is (which they should point out to voters), instead of working on fixing some of their mistakes from 4 years ago. Truth be told, the Affordable Care Act is not sustainable in its current format and needs some tweaking desperately in order to fully function. That being said, its full repeal and replacement with the old system is not an option either. Here’s why: anybody could be dropped at will by the insurance industry, leaving them no means of accessing the very medical attention they needed in order to live. In addition, there were no safeguards in place for people who were switching jobs or had just turned 18. Lastly, what’s the point in going back to a system where 1 in every 3 dollars was being used on administrative costs? Here’s a video of +Dennis Kucinich from back in 2010, where he talks about the system as flawed as it is now, to an extent, but also how much worse the old system was.

Like Loading...
To see and hear the enormous discourse we’ve got in us is heartening to see on display within the feeds on +Facebook+ Fan Page and +Twitter.  It means that Liberals, like myself, as well as Moderates and Conservatives, can pitch ideas of how to keep making America stronger. I think at the same time, that my posts sometimes end up attracting followers of +The Tea Party more than anything else, most likely because they call me a “Socialist” (Riiiiiiiiiiight!) for espousing the view that we could do a little more to help relieve the tax burden on about 98% of Americans by trying to get the very wealthy to contribute their far share. Let’s get real, while many conservatives agree with the assessment I’ve given out, +The Tea Party will continue to block anything that will even force the very wealthiest Americans to contribute because they are the “chosen ones” to have everything and that we ought to go after those who can barely defend themselves, which is the most bogus argument out there.

It’s as +Barack Obama‘s said, we’re going forward and we’re not going back to anything that was remotely disfunctional. It’s time to head this off, and make it clear as a nation that going backward is not an option!

News, Sports, Weather, Traffic and the Best of SF

Research and Analysis on the DPRK Leadership

The World According to Hip-Pop

Bringing you yesterday's news from Japan and Asia, today.

Snark is always an option

A Meddling Robot in a Human's World

The Librarian Who Doesn't Say Shhh!

An American in London

I like to think I'd be a part of Hemingway and Fitzgerald's posse.