I have to say that US President +Barack Obama is spot on in calling for 2014 to be a year of action. I’m with that 100% as it’s really time to build America from within. We can’t be going into foreign wars on a constant basis, we’re not going to have the money to do so. It’s time to turn to nation building here at home for a reason: our infrastructure is crumbling and we’re just in the starting stages of a new health-insurance market system. More needs to be tweeked is the President’s message, and he’s right. So let’s do this.

Like Loading...
Holy cow, where am I going to start with this? These folks at +Allied Waste Services: A Republic Services Company are absolutely incredible. Just one week after I called +David Canepa on the phone to tell him that there were no more trash cans in the middle of the street, guess what: they’re back!!! I have some photos so take a look and draw your own conclusions.

It’s really time to look at things in a less partisan prism and more in the sense of what’s getting solved. Why we seem to be regressing instead of progressing is actually very clear: We have more demagogues in Congress than problem solvers. At the same time there’s an alarming rise in voter complacency not seen since 1856, and partly because of how the Americans lost faith in government following the Watergate Scandal in 1974.
Lastly, everyone should know that there are Moderates still in the Republican Party.

Like Loading...
I saw a flash on the news this morning: Governor Brown declares state drought emergency | abc7news.com. So looks as if +Jerry Brown has declared a state of emergency due to the low rainfall we’ve had so far and the recent wildfire outbreaks. I can’t fault him for that as he’s spot on. Well, let’s try to conserve as much water as we can. 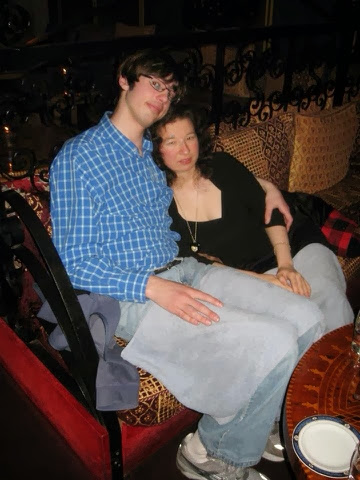 This photo may be nearly 3 years old, but it has meaning. For the past 3 years, I have been dating the lady in this picture. Luck would have it that she’s sweet as sugar and the most amazing individual to have at my side. She’s been a real influence always keeping my enthusiasm in check so that I don’t end up doing something insane. One thing I do appreciate about her is that she’s so family oriented, which is handy given the fact that I still have an elderly grandma. Yeah, I think of myself as a family man, but it means more to have a partner with that same mentality.

These cards both indicate the responsiveness of the +House Democrats, +Senate Democrats and +Barack Obama, via +The White House, and the tonedeafness of the +House Republicans and +Senate GOP to the situation faced by the American Public. Let’s face it, the +GOP  is out of touch with the rest of us and the +Democratic Party is trying to help. Think about this come November.

Share if you agree, and drop a like and/or follow, as well as a comment, on my Facebook Page and/or Twitter Feed if there’s more that we can do to make our lives easier without feeling like we’re asking for a handout. It’s up to us to shape the direction of this country, and that is why +Barack Obama is absolutely right in saying that: “There is no Red States of America or Blue States of America, there is the United States of America.” His point: we’re not Democrats or Republicans, we’re Americans, first and foremost. We love our country more than anything, and it’s time to take it in a new direction. That was the message we sent back in 2006 and 2008, and again in 2012.

Like Loading...
This is too nuts. For what reason would there be to commit arson on the Consulate General of China in San Francisco? To intimidate the communist government into democratizing? Yeah, good thinking…not! That’ll happen when the communist state is pressured from inside by the Chinese people themselves. In any case, there’s no reason to do this in my eyes, at all! This is only going to give President +Barack Obama and Secretary John Kerry a whole new unnecessary diplomatic headache. My hope is that they find the individual responsible for this act, and that they’re arrested soon by the +SFPD and the +Federal Bureau of Investigation. This kind of act is a complete violation of state sovereignty.
I saw the latest update from the +The Associated Press, about the investigation thus far.

News, Sports, Weather, Traffic and the Best of SF

Research and Analysis on the DPRK Leadership

The World According to Hip-Pop

Bringing you yesterday's news from Japan and Asia, today.

Snark is always an option

A Meddling Robot in a Human's World

The Librarian Who Doesn't Say Shhh!

An American in London

I like to think I'd be a part of Hemingway and Fitzgerald's posse.